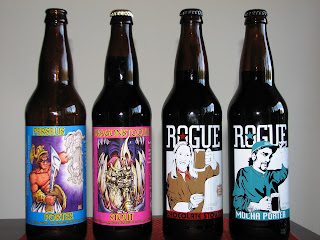 So I’ve finally had a chance to consume the four pacific northwest beers I picked up at Brewery Creek on Main St. and it is time for the final report. The Pacific Northwest is a beer maven’s dream with its dozens of craft breweries and its natural abundance of a wide variety of hops for these crafters to work with. Today I’ll be looking at two breweries from two states, four beers, 2 porters, 2 stouts, and a bunch of empty bottles.
Rogue Brewery hails from Oregon and is widely distributed across the US, but not so much in Canada. Elysian Brewery is based in Seattle and is far more of a local micro-brew, rarely seeing the light of day outside of the Pacific Northwest.
Beer #1 – Elysian Perseus Porter
This is one hell of a beer. Balanced and subtle with low alcohol levels for a porter (5.4% abv), this porter has an abundance of robust dark beer malty flavours without being over the top, unbalanced, or overly bitter. It’s texture is fantastic and every sip suggests the next. This is hands down one of the best porters I’ve ever had.
Excellent+
$7/bottle at Brewery Creek
Beer #2 – Elysian Dragonstooth Stout
This heady stout is dark and broody, creamy and delicious. It has great depth and concentration but wicked balance. This comes in around 7% abv, but you don’t feel the alcohol as this is quite an easy drinking stout. Rarely do I taste stout of this level. Good job Elysian!
Excellent
$7/bottle at Brewery Creek
Beer #3 – Rogue Chocolate Stout
I’ve reviewed this beer before, and it certainly is tasty. However, next to the Elysians it doesn’t quite hold up as well as it used to. Yet, this is still chocolate malty goodness in a glass with a beautiful silky texture. So, while not as subtle and well integrated as the Elysian, it’s still a very tasty brew.
Very Good+
$8/bottle at Brewery Creek
Beer #4 – Rogue Mocha Porter
The mocha porter is slightly bitter, but still reasonably balanced. It is fairly roasty and toasty with the malts, and has a nice length on the finish. The texture is creamy, but overall this beer lacks the complexity of the Elysian Perseus Porter and the sheer smooth chocolatey intensity of its brother the Chocolate Stout. So, while still a decent beer, this is my least favourite of the four.
Very Good
$8/bottle at Brewery Creek
So what has this tasting shown? The Pacific Northwest is the place to be for a good micro-brew. Plus, Elysian is a fantastic brewer that deserves more exposure – I highly recomment you seek out whatever you can from them. I’ll be going to a beer tasting in Seattle in the summer, and if these four beers are indicative of the selection and quality I’ll be a party to there, I am really looking forward to it.