The Cult of Zin: A Zinfandel Tasting

This weekend I ran a fun little tasting event using the theme of Californian zinfandel from smaller producers that have built up a reputation based on the grape. It was a great event, and it really highlighted the amazing diversity of wine being made from the Zinfandel grape today. We focused on 3 wines from the Napa Valley and 3 wines from the Sonoma Valley. 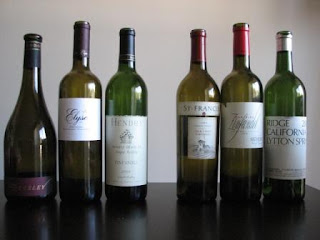 We started with Napa and then moved on to Sonoma. Before I begin my tasting notes, I thought it would be interesting to share a bit of my research on the Zinfandel grape (since I didn’t know much before the tasting). Firstly, Zinfandel is the 2nd most widely planted red grape variety in California and it tends to produce rich, jammy, robust wines with a purple-ish hue. Zinfandel vines can range from young plantings to super old 100 year old plantings, where the vines look a little something like this:

I remember seeing this on my trip to Napa/Sonoma and always thought Zin vines were pretty wisened. I hoped that since the vines themselves told a story that the grapes would be even more exciting.

What was most interesting about the tasting was that the wines produces a clear divide amongst the participants and that this divide was largely along regional lines. We began the tasting with the three wines from Napa: 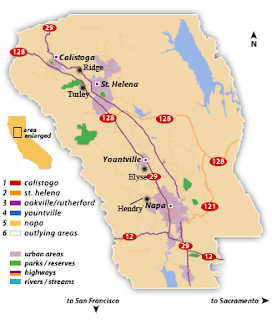 Turley is pretty much the definition of a cult winery. The waiting list is several years long and zin lovers swear by their something like 8 different Zinfandels. We are lucky enough in Vancouver to have a store that gets a small allocation of these wines, and I just had to pick one up for this tasting.

The nose suggested super ripe cherry and raspberry and the colour of the wine was a beautifully consistent light garnet. The palate was sprightly and alive with fruit, especially raspberry. While consisting of a massive 15.7% alcohol by volume, the wine was smooth and not alcoholic at all. Out of all the wines we tasted, this was to me the truest expression of fruit and the most ‘authentic’ or at least unique expression of the zinfandel grape. It did not have any commercial character, over-oakyness or any hint of over-manipulation. It was truly fantastic.

The Korte Ranch zin from Elyse was heavily toasted and had an incredible nose of caramelized fruit, which only intensified with air. Elyse is another smallish producer that has built up a bit of a reputation for its zinfandels – so I was quite excited to try one. The wine was a dark maroon-like colour and promised to be something intense and dense. It did not dissapoint. The palate brought forth more caramel flavour coupled with boysenberry and had just amazing concentration. If there is any fault with the second wine was that it was perhaps too toasty, which overwhelms some of the purity of the fruit. It was still a fantastic bottle, however, and at least for me one of the highlights of the evening.

Hendry is located in the southern Napa valley, right outside of the town of Napa. This zinfandel was completely different from the previous two in that it was built in much more of an old-world earthy style. I was very surprised to see this coming from a Zin. Another rich dark wine, the Hendry had a supremely silky texture and an amazingly subtle nose of blackberry. This was the most balanced wine of the night and had by far the longest finish. The tannins were moderate, but had a decent enough grip to maintain the wine’s development from the initial sip through the mid-palate and to the finish. The wine also went fantastically well with appenzeller cheese (one of three cheeses we picked up for the tasting), which brought out a lot of the wine’s fruit – mostly blackberry, but an intense and deep version of blackberry.

After Napa we moved on to Sonoma, which actually brought forth a serious change in wine making style, texture and flavour. It was a fun experience! 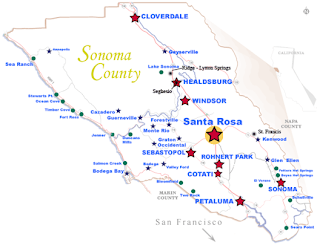 Wow, this was intense! The nose consisted of super open fruit aromas like blueberry and cassis. This wine was almost nothing but fruit and while I didn’t love it by itself, with food, like the appenzeller or the Piave we had, it mellowed out quite a lot and became a little more balanced. This is pretty much the definition of a New World fruit bomb, and I felt it had almost no subtlety. It was not my favourite. However, at least half the group loved this wine, which goes to show you there is no accounting for taste! 🙂 What it really shows is that palates differ greatly and that wine tastings are a great way to explore those differences. Rather than debate about the quality of the wines our group ended up having a lively discussion about the different styles of wine making and the various facets of wine in general. The divide made for an exciting night.

Good+ (My Rating, although I anticipate several people would have rated this Excellent)
$36 at BCLDB

Seghesio has been receiving some rave reviews from major wine publications of late, but they have also developed quite a reputation amongst zin lovers. So, I had to give them a try. Interestingly, Sonoma tends to have much more old vine zinfandel than Napa. Part of this is probably due to the fact that Sonoma is twice as large as Napa, but I wonder about the density of Zin plantings in Sonoma vs. Napa. I also read that Sonoma was planted with vines long before Napa. Interesting!

The Seghesio had a nose of dustry earthy cherry. The palate revealed yet another fruit bomb, but this time with added complexity and depth. I found the wine to be intense, alcoholic, and heavy on the cherry and cassis. I didn’t love it by itself, but when paied with Piave in particular it took on a whole new character and became quite a bit more balanced. Overall, a solid effort, if not my favourite.

I have been waiting to try a Ridge wine for quite some time. They make a very wide range of Zins from both Sonoma and Napa. The Lytton springs version I think is the most readibly available and while it didn’t meet my expectations it was a decent bottle of wine. However, given the interesting divide between the Napa and Sonoma Zins, I’d love to try out a “York Creek” zin bottling from Ridge since that particular wine hails from Napa. On to the tasting:

The nose was very blackberry and actually a little coarse. This wine is blended with petite sirah and carignan which added a realtively strong tannic backbone to the wine and helped to concentrate its flavours. Still, I was not overly impressed with the balance of the wine, especially compared to the Hendry. Nor was I overly excited about the fruit, which I found somewhat typical. I feel as though this wine would improve a lot with a couple years, although many zins are meant to be drunk young. With appenzeller the wine took on a much more blueberry like character, probably from the petite sirah. Overall this was good, although a big disappointment for me based on my expectations.

So, there tended to be a huge divide between the Napa and Sonoma wines, with the Napa wines being far more drinkable on their own and the Sonoma wines requiring some food/cheese to temper their intensity. I tend to be a fan of balanced wines unless the intensity of a fruit bomb is tempered by some other characteristics. I have no hard and fast rules, though, as I do absolutely love Howell Mountain wines from Napa and they tend to be super intense – see, for example, my review of the Beringer Howell Mountain Merlot.

The Turley provided the truest expression of fruit out of all the wines and I will definitely be seeking out their higher-end bottlings in the future (the Juvenile is their cheapeast wine and is supposed to lack some of the character of their single vineyard zins). The Hendry was the most old world, and was perhaps the most elegant of all the wines. The St. Francis seemed to be a favourite amongst many, and it is good value at that. Just be warned that it is also a mega fruit bomb. The Elyse was probably the most concentrated of the wines while the Seghesio was the most complex of the fruit bombs. The biggest disappointment for me was the Ridge, although I preferred it to the St. Francis. However, given the ridge is $15 more, I would not go for it again.

In the end it was a fantastic tasting and I highly recommend everyone who has the chance to either organize one of these or attend one since they are a great way to compare wines and learn about wine amongst friends.