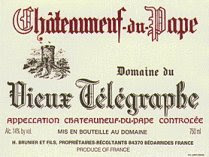 Today I had the lucky fortune to attend a paired luncheon with winemaker Daniel Brunier of Vieux Telegraph. We had six of the wines produced by both the famous Domaine and the other projects run by Mr. Brunier and his brother. This all took place at Mistral Bistro, a fantastic little French Restaurant here in Vancouver.

We started with an aperatif of Antech 2004 Blanquette de Limoux “Grand Reserve” – a sparkling wine unrelated to Vieux Telegraph, but meant to whet the palate. This was nice and full, with strong toast characters and a nice balance, but it didn’t get me over my predilection against sparkling wine. I am not a huge fan of the texture and overall mouthfeel of these wines.

Next up was the first course: marinated lightly seared salmon (raw in the middle) served on a salad of in season artichokes a la Greque, cucumbers, and nicoise olives. This was nicely presented and had a beautiful combination of flavours. With the first course was paired three wines:

All three wines paired very nicely with the salmon, further dubunking the white wine with fish myth. And, who would have thought Grenache would pair with Salmon, but it truly worked beautifully.

The first wine, a white blend from the famed La Crau vineyards was very balanced and smooth, with fantastically integrated acidity that paired great with the Salmon, but did not overwhelm the flavours of the artichoke. Fresh in season artichoke is actually much less tangy than its canned counterpart, and provides a far better balanced to dishes. I’d rate the first wine as:

I’ve had the Les Pallieres several times, from both the 2003 and 2004 vintage. I enjoyed the ’04 much more, but the 2001 here was more similar to the 2003 in its lightness and simplicity. However, this lightness made it a truly fantastic food wine. In fact, in the future I don’t think I will be drinking Les Pallieres without some sort of food pairing as the structure and quality of the wine is really meant to balance out with the proper protein pairing – and the salmon was a great match. I found the wine to have classic dry cherry flavours and moderate tannin and acidity.

Another excellent pairing with the salmon, this Domaine produces a gamey, earthy, old-world wine that reminds me of certain Tuscan flavours. I have never tried this Domaine before, but I will certainly seek it out in the future. My only criticism is that the flavours, while good, are more typical old world and the wine lacks the finesse of the next three bottlings.

After a pretty hefty first course, we were treated to a massive portion of Hautes cotes de boeuf braised in a savory red wine stew, vegetables, and Ricotta quenelle. This was accompanied by innovative and very flavourful fried chick pea cakes. There’s nothing like a properly made french stewed meat dish to bring me closer to my French Canadian heritage and make me long for French Onion Soup, Tortiere, and a big ‘ol apple boiled spiced French Canadian ham. This dish is a memory dish for me, and Mistral did a truly authentic and exceptional job here. This dish was paired with the following three wines:

The last wine is made only for friends and family and is not available for sale anywhere, so we were quite lucky to get a taste of this. Again, all of the wines paired fantastically with the food and the lunch really showcased the wines’ ability, even at such high levels of refinement and elegance, to pair in a complex way with the proper dish.

This was very refined and balanced – probably the most balanced Chateauneuf I have tasted to date. I loved the elegance and structure, and found the wine got more complex with more and more air. This was quite fruity (light red berries), without being really fruit-forward. I could also detect hints of earthiness without this being at all rustic – an elegant earthiness. Also, the tannins gripped firmly, but became quite silky paired with the beef stew.

Very similar to the first wine, but it had a much stonier complexion. I could literally taste the smell of well worn stones familiar from childhood excursions. Again, an elegant and refined wine with firm grippy tannins that paired very well with the stew. This and the previous wine evolved over the lunch and competed for my pick of the tasting. I would have to tie them equally in the end, perhaps with a slight edge for the 94.

A very different Chateauneuf, and one that is not for sale on the market. I found this, strangely, to be similar in some ways to Amarone with a heavy liqueur flavours. This was well structured, but very powerful. However, it lacked the same elegance of the two Vieux Telegraph CDP’s.

Overall, this was a great experience to drink wines while listening to stories of family history, winemaking philosophy and technique, and the impact of weather on the grapes from the winemaker to one of the top Domaines in the region. And, if you live in Vancouver, I highly recommend giving Mistral Bistro a try – the service and food were fantastic. This event was put on by Marquis Wines.