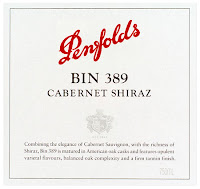 I picked up this wine on a high recommendation that this was Penfold’s return to form on 389 – the wine also known as the ‘mini-grange’. I am glad I followed up on the suggestion.

This wine is a blend of Cabernet Sauvignon and Shiraz and as such the nose combines smooth cassis and moderated, but very pretty Eucalyptus. The nose exploded upwards from the rim with one of the most powerful yet elegant bouquets I’ve nosed in a long while. The palate was long and complex with a full mouthfeel and lots of vegetable, rich black fruit, tar and licorice. I also sensed some earth and minerals here, but in a distinctly Aussie style.
This wine elevated itself above typicity of style while bringing in tons of flavour, terroir, and a truly unique style. One of the best wine’s I’ve tasted, and at an excellent price right now in BC.
Excellent+
$50 at BCLDB
Posted in: $40-$60, Australian Wine, Cabernet Sauvignon, Excellent, Shiraz