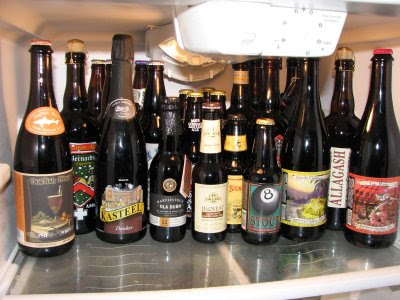 So the good friend I went to the Seattle Beerfest with was leaving town and so we faced the imperative of drinking the large majority of our spoils before he did so. These notes are the result of the first session.
Jolly Pumpkin – La Roja Artisan Amber Ale 7.2% ABV
This was aged in oak barrels and combined soft but balanced sourness with depth and roundness given to it by the oak. A very nice sour beer.
Excellent
Port Brewing – Old Viscosity Ale 10% ABV
This was aged in bourbon barrels and certainly brought vanillan action to the table. Thick, rich and deeply malty this strong port was a phenomenal example of how chocolatey richness can be brough by proper brewing rather than added chocolate.
Excellent
Stone Brewing – Oaked Arrogant Bastard Ale 7.2% ABV
Floral and moderately hoppy. The oak is subdued, probably due to the use of oak chips rather than real barrels. A good quality easy to get (in the US) IPA, but Stone can do better.
Very Good
The Lost Abbey – Lost and Found Ale 8.0% ABV
Yeasty and somewhat a cross between a belgian dubbel and trippel. Reasonably tasty, but also somewhat standard.
Good+
Shmaltz Brewing Company – Coney Island Albino Python
This spiced lager was lemony and very clove-like. A unique and successful take on lager that brings the unfortunately popular style into the realm of properly brewed beer.
Excellent
North Coast Brewing – 2008 Old Stock Ale
A properly made malty Barley Wine. The slight hops is well done but not overwhelming, which makes this eminently drinkable. Nothing exceptional to bring it to the next level, but very solid and very enjoyable.
Very Good+
Unibroue – Ephemere Apple
Yeasty and balanced. The apple brings out the floralness and the yeast.
Very Good
Posted in: Tastings