This weekend was host to one of the best festivals I have had the pleasure of attending. And fortunately for me, it was filled not only with a large number of beer swigging nerds, but also a huge range of exceptional and rare beers from around the world. I believe there were over 150 beers, and I probably managed to taste a third of those. So many beers in so little time meant it was difficult to rate each exactly. Thus we separated the beers into three categories: 1. those we liked; 2. those about which we held a neutral opinion, and; 3. those we disliked. These are the collaberative notes of myself and friends.
Those We Liked
Old Stock 2008 – North Coast – California – Barley Wine – 12.5%
Notes: smooth and well balanced between hops and sweetness. Another winner from North Coast. Beer Advocate rating: 4.12.
Old Crustacean 2008 – Rogue – Oregon – Barley Wine – 11.5%
Notes: a bitter but flavourful brew. Maybe slightly over-hopped, but still packs a flavour punch. Beer Advocate Rating: 4.02
Harvest Ale (Lagavulin) – J.W. Lees – Manchester, England – Barley Wine – 11.5%
Notes: Firstly, this was only available for about 1 hour at the festival. Luckily I managed to snag a taste, and boy was it worth it. First of all, this is nothing like barley wine. Rather, this is like drinking a cross between beer and scotch. Poured out of a wooden cask, this beer was aged in lagavulin scotch barrels, which gave it a smoky, sweet and caramelly flavour highly reminiscent of a very good scotch. This was my beer of the show. I picked up a 300ml bottle (not the same as cask poured, but hey) at a specialty store in Seattle for $14!!! Probably the only beer I’d pay that much for. Beer Advocate Rating: 4.03.
BB10 Barley – Maracalagonis – Italy – Barley Wine – 10.0%
Notes: Yet another barley, this rare beer sailed over from Italy for the show. This was good, and not too sweet, but not my favourite Barley Wine of the show. No beer advocate rating.
Malheur Dark Brut – De Landtsheer – Belgium – Bière Brut – 12.0%
Notes: A decent micro-bubbly wine somewhat similar to Deus. However, while spritely and fruity, this certainly isn’t worth the $30 a bottle they ask for it. Beer Advocate Rating: 4.08
Abbaye de Saint Bon-Chien – BFM – Switzerland – Bière de Garde – 11.0%
Notes: An oaky sour beer. You have to like the style in order to like this stuff, and I felt the La Folie (reviewed later) was a better sour beer. Beer Advocate Rating: 4.29.
Aventinus Weizen-Eisbock – Schneider – Germany – Bock – 12.0%
Notes: I very much like Aventinus, but had never tasted their Eisbock before. While not rare per-se, bocks are only made a certain time of year in Germany and so it was a pleasure to taste this not so easy to find and highly rated beer. Very banana heavy, this was sweetish and floral, but very well balanced. I would buy this for a special occasion given its $7 a 12oz bottle price tag. Beer Advocate Rating: 4.12.
Palo Santo Marron – Dogfish Head -Delaware – Brown Ale – 12.0%
Notes: One of the special pours of the festival and only available on a single day. This was a fantastic brown ale. Balanced, unique (brown sugar, caramelized flavours), but balanced between maltiness and hops. Just a tinge of sweetness. One of my top 5 of the show. Beer Advocate Rating: 4.21.
Ruination Ale – Stone – California – Double IPA – 7.7%
Notes: Despite being a double IPA, this was not over the top, which was the downfall of many of the extreme beers poured at the fest. Floral, foresty and perfectly hopped. An excellent brew and one to try even if you don’t like IPA! Beer Advocate Rating: 4.29
XX Imperial Porter – Deschutes – Oregon – Imperial Porter – 10.3%
Notes: A quality full bodied porter with good roasted malt flavours and moderate hops. You can taste the bigness and alcohol in this beer, which can be a bit intense, though still enjoyable. Beer Advocate Rating: 4.28.
Top Sail (Bourbon Aged) – Full Sail – Oregon – Imperial Porter -9.9%
Notes: One of the best porters at the show, while strong this was very very tasty and balanced better than the XX from Deschutes. The imperial makes porter more full bodied, roasted and flavourful than regular porter. This is an excellent example of the ‘genre’. Beer Advocate Rating: 4.20
Pêche Mortel – Dieu du Ciel – Montreal, Quebec – Imperial Stout – 9.5%
Notes: A coffee based stout that was full flavoured, intense, balanced, and all ’round plain great. Tasted subtle coffee and tobacco notes. One of my top 5 beers of the show. Beer Advocate Rating: 4.48.
Ola Dubh 30 Yr – Harviestoun – Scotland – Old Ale – 8.0%
Notes: Another super rare cask beer available for only 2 hours at the show. This one was aged in 30 year old scotch barrels and was dark, peaty and cigar-like. Less like scotch than the Harvest ale, this was still a very flavourful and unique brew. Another top 5 of the show. Beer Advocate Rating: 4.34.
La Folie – New Belgium – Fort Collins, Colorado – Red Ale – 6.0%
Notes: Crazy sour. Probably the sourest beer I’ve ever had. But, despite this, it had fantastic oaky and woody flavours that gave it a lot of character. Further, it was great for the heat and cut the palate perfectly after all the super-hopped beers. Beer Advocate Rating: 4.38.
Old Chub – Oskar Blues – Colorado – Scotch Ale – 8.0%
Notes: Considered by some the best Scottish ale around, I don’t understand the hype. While good, this was standard Scottish ale made well. Beer Advocate Rating: 4.08. 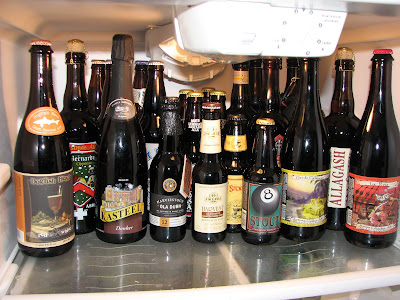