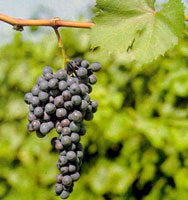 Dolcetto is an underappreciate grape. Grown in the northwest Piemonte region of Italy, it is often forgotten, with Barolo and Barbaresco stealing the show. However, Dolcetto is a supremely food friendly wine that should not be overlooked, especially with the right pairing.

This Dolcetto was extremely small production (350 cases) and boasted a nose of light red berries and earth. The palate expanded the earthy component, which was quite rich, to add mushroomy flavours. Not at all tannic, this was very structured, with a tight acidity that paired perfectly with a Bechemel, morrel, prosciutto linguine. With such a fantastically smooth texture in the mouth and such potential for food pairing, this particlar Dolcetto outshines other solid examples of the grape. A very very strong expression. Not having a picture of the bottle, I opted for one of the grape itself. If you haven’t yet had a Dolcetto, it is worth checking one out.
Very Good+ to Excellent (with proper pairing)
~$38 at Steamworks Liquor Store
Posted in: $30-$40, Dolcetto, Italian Wine, Very Good