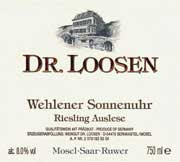 I had this on the same night as the Roslack to compare something at 1/4 of the price. I wanted to get a sense of whether the Roslack was that far superior to an already respect but much more reasonably priced riesling, this time from the Mosel region.

The Loosen Auslese had a nose of classic petrol, minreal and citrus. This was not nearly as complex as the Roslack. Neither was the palate, with whipped cream, trifle, peach and pineapple flushing the palate with dessert-like intensity. I found the sweetness handled less well in this compared to the Roslack, with it being more toffee-like and sticky. The Roslack, on the other hand, had the delicate touch of a properly sweetened dessert from a high-end restaurant. So, despite not being as balanced, well structured, or delicately perfumed as the Roslack, this was still pretty tasty. However, it is not something I would drink that often.