I decided to take my last tasting group on a bit of a bonanza through some expensive and iconic wines from Australia (unfortunately no Grange). We tasted through 6 bottles of leading Aussie wine, with fairly differing results from the Crowd. All were well made and tasty, but there was a clear ‘winner’ for me that greatly surpassed the others. Let’s take a look at the wines. 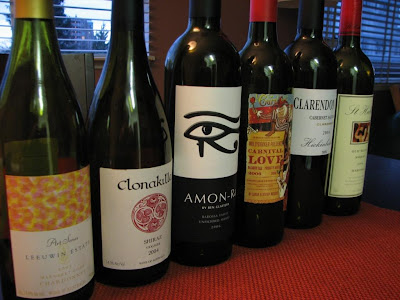 This wine has been hailed by many as Australia’s best Chardonnay. Penfolds’ Yattarna is usually included in that group, and I have previously tasted that as well. We were definitely drinking this too young as it probably needs another 5-10 years in the bottle to fully expand. The nose was very tropical with a touch of vanillan oak. Liquid crystal in the glass, this was quite pure and pristine to look at. The palate, though, was quite subtle with hazlenut, pineapple and other tropical fruits, striking minerality and subtle toast. With a silky and very supple texture, this Chard had a lot to offer, but was not neraly complex or bracing enough for me at this price point. I definitely preferred the Yattarna for its bracing acidity and ripping minerality. With age, though, that could be another story.

These guys pretty much represent the top of the line for Shiraz/Viognier cote-rotie style blends in Australia. Made in limited quantities and with a reputation that sees them sell-out quite quickly I was happy to see this at the local wine store. The nose was incredibly aromatic with earth, honey, intense violets, eucalyptus and spice. So incredibly profound. The palate, however, brough this to another level for me with perhaps one of the most unique and alluring mix of flavours I have yet tasted: floral and violets, pepper, suppple red fruits, and an endless finish. This wine exhudes elegance and profundity in its structure and balance. The best Australian wine I have ever had, and one of the best I’ve had period.

Glaetzer is a bit of a hot shot wine maker who has steadily increased his profile over the years. This is his pet-project wine and the flagship of the Glaetzer range. Made from 110 year old vines and unfiltered the nose on this wine had confection, chocolate/mocha, and expansive cherry aromas. Very balanced, creamy, and far more elegant than I expected, this had a fantastic structure with a very thoughtful amount of acidity. Its richness was complimented fantastically by aged Gouda. 99 Points from Parker.

A controversial wine made in a hyper-manipulated and extracted style. This has become a critic’s darling and was named as #7 wine of 2008 by Wine Spectator. I have previously had the Mollydooker ‘Boxer’ Shiraz which I didn’t like that much, although I recognized that others would. This, however, as a big improvement on that with an extremely confection heavy and rich nose that expanded into a palate of cassis, coffee and candy floss. It was a pretty simple flavour, but it did it to the best of its ability. A sweet style shiraz, but this was way better balanced than the Boxer. I liked it, but did not love it.

Known for creating controversial, super intense and massive wines, the winemaker Roman Bratasiuk has established himself as one of the most lauded and hated winemakers in Australia. That said, I found this to be a quite elegant and well structured cab. While definitely new world, it did not feel hyper-extracted and had a napa-like bouquet of leather, earth, cedar and mint, which extended into the palate. Very nicely made and not what I was expecting.

St. Hallet is a Grant Burge project, and Grant Burge is considered one of the best wine makers in Australia. The Old Block is one of Australia’s most famous shiraz’s. This was pure barossa goodness, with great purity of fruit and an unashamedly Australia style. The nose was spicey with rich black and red fruits, with the palate peppery and cherry filled. A great drinking wine, but lacking the complexity of the majority of the other wines we tasted.