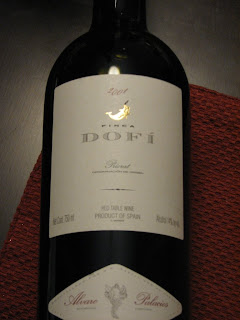 With this bottle Alvaro Palacios is prooving his consistency. I have previously enjoyed the entry level Les Terrasses bottling from Priorat, and had occasion this holiday to open the higher end Finca Dofi. I heard that Dofi actually ages unlike many bottles from Priorat, so I thought this 7 year old bottle would be an interesting experiment.

The nose had a brunch-like element: pancakes and maple syrup, spices like nutmeg and cinnamon, and blackberry. The palate was a nice combination of finesse and power with spicey chocolate blackberry crepes dusted with sugar, and a rounded woodyness. Structure and finish were both there in a very high class way, but what made this special was its character as a very unique and refined terroir driven expression of Grenache.