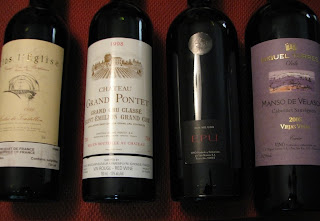 So my friend who has lived in Chile for a couple years and recently returned to Vancouver and myself decided to set up a Chile vs. France wine-off where we would compare red blends from the two countries. Luckily for me, my friend brought back a couple wines that are pretty hard, if not impossible, to find in Canada. I brought two aged Bordeauxs to the table. It was very interesting to compare two regions distinctly embedded in their terroir, and yet reaching internationally in their appeal. We started with the Bordeaux’s…

Wine #1 Clos L’Eglise 1999
This Bordeaux from the Cotes de Castillon had a nice garnet colour and a nose of cherry and tobacco, which later with air exploded into a super-coffee/mocha monster. The palate brought tobacco, cherry, leaves, and moderate tannins, and again with air this expanded into a mocha-fest. I think this could do with a little more time in the bottle, but a good decant will bring out a lot of the flavour. A blend of 60% Merlot, 20% Cabernet Franc and 20% Cabernet Sauvignon. I enjoyed this, and in better years I’m sure this can be fantastic.

Wine #2: Chateau Grand Pontet 1998
Here we have a wine from St. Emillon with a nose of subdued blackberry and maple. The colour was light-ish with a medium red fading to a light browny-red on the edges. This was a bit of a sleeper: dissapointing at first, but with 2-3 hours air opening to be the best wine of the night. The palate was soft, but slightly tannic, with licorice, mineral, cigar box, and chalky limestone. These were such smooth and subtle flavours that they really highlighted this wine’s elegance. Predominantly Cabernet Sauvignon.

Excellent (but needs decanting)
$70 at BCLDB

Wine #3: Almaviva Epu 2001
This wine is Almaviva’s second wine (Epu means “second”), and seems to be unavailable in North America. A blend of Cabernet Sauvignon and Carmenere, this had a nose of leather, mint and typical funky Chilean fruit. The palate was all chocolate, mint, toast, and blackberry. Very tasty, and while lacking the complexity of the Bordeaux’s this was excellent value and tastes a lot more expensive than it is.

Wine #4: Torres Manso de Velasco Cabernet Sauvignon Viejas Vinas 2005
A wine from Curico, a southerly region in Chile, this cab had a nose of flowers, game, cedar and pepper. The palte again brought funky chilean fruit, chocolate, balckbery, and had really nice concentration. A bit awkward upon opening, the second day saw the wine somewhat smoothed out and much more mocha-like. However, this probably needs some time in the bottle to show its full potential. Good, but not drinking as well as the Epu.