Dieu du Ciel: 3 Beers From Above 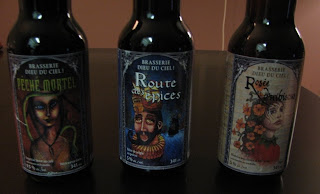 It is unfortunate but true that American micro-brews have far surpassed Canada in variety and quality. It seems our antiquated shipping laws have played a part, and perhaps the lack of variety helps to supress the demand for, well, more demanding beer (palate-wise). Dieu du Ciel, however, break from the pattern of boring Canadian micro-brews and bring us some serious sass from Montreal. They only very recently started bottling. I tried three of their many beers.

Beer #1: Péché Mortel
For those who don’t speak French – this beer can be translated as “mortal sin”, and is a very rich and intense coffee stout with heavily roasted malts. Very robust on the palate, with chocolate and dark roasted coffee, this was very smooth and lingered pleasantly in the mouth. Not too bitter or too sweet, this surpasses many Imperial style stouts by its better balance. A great winter warmer.

Beer #2: Rosée d’Hisbicus
A pink semi-sour beer brewed with Hibiscus. Sour, floral and nutty I found the malts to be a bit weird. Up front it is a pretty decent beer and drinks easily. Furthermore, it has a nice acidity and drinks somewhat like a white wine (I recommend sour beers for Sauvignon Blanc lovers) However, the finish was all disjointed and, honestly, boring. Nice try, but not so much.

Beer #3: Route des épices
Spice route – an awesome spiced beer. Pepper for sure, but also cloves, nutmeg and other exotic spices in a medium-dark ale. Medium bodied, but packs a brilliant spicey and layered punch in the mid-palate. A fantastic spiced beer – perhaps the best in the style I have tasted.

Two out of three ain’t bad. If you are in Canada, and especially Montreal, seek these guys out – it is well worth the effort. And, it’s nice to proudly support Canadian beer for once!