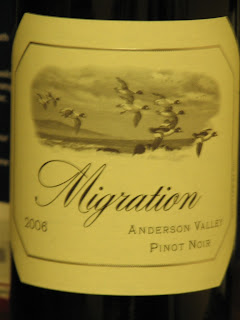 It’s been a long week. Adjusting to a new school, a new legal and political culture, and life abroad has been tiring. I’ve been overwhelmed with trying to understand American Constitutional law, which is not only incredibly different from Canada, but relies on a completely different set of political and historical assumptions. For students born and raised in the US, much of this is second nature – but from an outsider’s perspective it is both enlightening and frustrating. But, at least I now surely have a glimpse of the untold political assumptions that inform legal systems.

That said, time for some wine. This pinot is made by an off-shoot operation of Duckhorn, one of Napa’s best producers. This is the baby brother of the Goldeneye pinot, which, as I have recently discovered, will be poured at Obama’s inauguration dinner. This had a big classic california pinot nose of dark roasted strawberry preserves, candy apple, and spice. On the palate I found sweet ripe fruit that was quite up front, and a little chocolate, rich red delicious apple, and a touch of candy-floss on the finish – but don’t get it in your mind that this is syrupy or goopy – it’s not. I think in the end that this is a nicely made California style Pinot Noir, but my preference is still for Burgundy. Nonetheless, if you like the American style, this is a good example, although perhaps overpriced.
Very Good
$32 at Adronico’s
Posted in: $30-$40, Californian Wine, Pinot Noir, Very Good