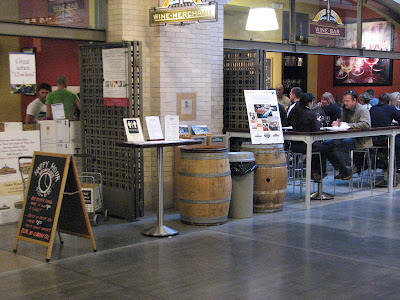 So back when I first visited San Francisco in 2007 I stumbled upon a wine bar in the Ferry Building that looked pretty interesting. However, it wasn’t until 2009 that I actually went there to try a few wines. It’s a decent wine store and bar, with the added benefit that you can bring any food item from the Ferry Building to the bar to have with your wine. If you have ever been to the Ferry Building before, then you know that this is a tremendous boon, since food is king there! They pour wines in 2oz, 5oz, 1/2 bottles and full bottle sizes. I opted for 3 2oz pours.
Wine #1: Mount Eden Chardonnay 2007
From Arroyo Valley in Monterey, CA, this good value Chardonnay had a nose of citrus, apple, and lemon curd. The palate expanded dramatically to include saffron, pineapple and more lucious lemon. Fun, tasty, a good with food, but a bit impersonal (I prefer cheap Burgundy Chards to this). However, if I could get this for this price in Canada, I would buy it by the spades.
Very Good
$20 a bottle at Ferry Plaza Wine Merchant (FPWM for future reference)
Wine #2: Boekenhoutskloof The Chocolate Block 2007
A nose of balsamic, chocolate, game and spice, this promise more than it delivered with a basic palate of standard new world chocolate, blackberry and spice. In the end, this is boring and way overpriced, despite the rave review from the wine merchant.
Good+
$38 at FPWM
Wine #3: K Vinters ‘The Boy’ Grenache 2006
K vinters has a great reputation and I’ve been dying to try something from them. They are just too expensive in Vancouver to justify the purchase. I have to admit that I was somewhat disappointed, even though this was decent. The palate had pepper, chocolate and spice and tasted very much like a southern Rhone Grenache. But, in the end, this is super overpriced. It should be less than 1/2 of what they charge.
Very Good
$40 at FPWM
Posted in: San Francisco