A Day in Napa: Cakebread

After lounging in the sun at Nickel and Nickel we took a short trip two doors down to Cakebread – also hosting a long lineup of Cabs for tasting – for a direct comparison. As a lesson in winemaking, the two styles were fundamentally different, despite both originating from the imagination of Napa Valley icons. These types of experiences speak to the diversity of California wine making, which often gets ignored or dismissed by certain ‘anti-Parker’ types. And, while I remain unconvinced of the bad rap given to California and its wines, I think Cakebread exemplifies the approach to Napa winemaking that many seem to deplore. I, on the other hand, did not have quite so negative a reaction. 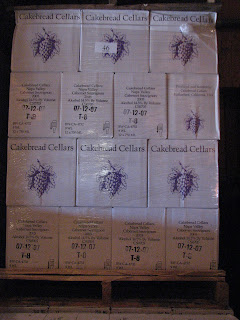 As we stepped into yet another barn-like structure, we were greeted with a selection of four very high end cabernets and a back-room white-wine adventure. As is Cakebread’s want, each of the wines was paired with a delectable cheese, with plates of charcutterie not far away. These guys understand that wine is made for food – perhaps due to Mrs. Cakebread’s credentials as a professional chef. 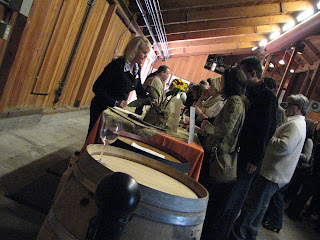 First off we tried the basic 2006 Napa Valley Cabernet Sauvignon which is by far the best selling cab in Cakebread’s portfolio. Here we had a flavourful fruit blastmaster, with a massive punch but not a lot of depth. Black fruits and cherries predominate. I can’t help but feel that this is, nonetheless, overpriced. Very Good. $65.

The next three pours fulfilled a long unrequited desire of mine to taste Cakebread’s single vineyard Cabernets, beginning with the 2005 Dancing Bear Ranch Cabernet Sauvignon which had very up front sweet fruit notes of cherry and black currant, and an almost syrupy texture. This wine is somewhat like getting punched in the face with oak and fruit. If you like that style, this will satisfy. If you are looking for subtlety, look elsewhere. Very Good. $106.

The 2005 Vine Hill Ranch Cabernet Sauvignon had an added layer of complexity over the last two wines, with a nose of coffee, licorice and black fruits. Rich and sweet, there was yet a spring to the mid-palate that, as Martin described it, was like “turning on a lightbulb in my mouth”. The layering is more intricate than the last two wines, but don’t mistake this for something with old-world finesse. This is an up front smack you in the face Napa Cab. 15.5% abv. Very Good+. $106.

Our last dabble into the realm of single vineyard Cakebread led us to the 2005 Benchland Select Cabernet Sauvignon with its nose of sweet fruit and massive palate of black and red fruits blended into a vanilla cocktail. I can best describe this wine as ‘tightly wound power’. Another blockbuster – but for this style I prefered the Vine Hill. Very Good. $106.

Before I go onto the whites, which are of a somewhat different ilk, I feel inclined to point out the contrast between the Nickel & Nickel style, with its restraint, structure and elegance and the Cakebread with its balls-to-the-wall uppercut powerhouse action (to use technical terms). This sort of contrast is what makes Napa such an interesting place, and a region of the world that is ultimately far more complex than those outside the US tend to recognize. That said, onto the whites…

We began the white wine tasting with the 2007 Sauvignon Blanc, which had a honeyed and floral nose that was quite full bodied. The palate was all roundness and thickness with quince, and creamy oak-like notes. Rich and round this is the antithesis of a Sancerre. Would still pair well with a richly prepaired seafood dish. Very Good. $24.

Unto the Chards we then did go, beginning with the 2007 Napa Valley Chardonnay, which honestly had a fairly innocuous nose of standard tropical fruit and a standard well-balance new-world Chard palate. Nice, but lacking depth and personality. Certainly not worth the price. Good+ to Very Good. $39.

The 2006 Chardonnay Reserve from Carneros was a huge step up from the basic bottling. The nose emitted baking spices like nutmeg, with the palate opening the spice structure to include pineapple, kiwi and dragon fruit. While this had a creamy thick texture up front, there was a decent level of acidity on the back palate that kept this alive. Only 15% Malolactic fermentation kept the new-world opulence reasonable. Very Good to Very Good+. $55.

Last up we tasted the 2006 Rubaiyat, which is an intruiging blend of Pinot Noir and Zinfandel. Designed as a grab and go BBQ wine, this is actually quite a thoughtful blend with a nose very much like a cru beaujolais. The palate shows the zin very subtlely through a back-end peppery component that is sure to compliment red meats well. Other than the pepper this was all strawberry, barnyard and spice. Amazingly the zin and the pinot integrated perfectly. Very Good+ to Excellent. $32 available at the winery only.

A nice contrast to Nickel & Nickel, and a very interesting look into how my palate has developed over the past two years. I highly recommend periodic returns to once storied wines to reassess your palate. My final assessment is that Cakebread makes good wine, but that they typify how Napa can become over priced and over ripe, with fruit bomb smackdown wines that, while tasty, lack nuance. An educational experience nonetheless. And this was only the first half of the day!