A Day in Napa: St. Clement

After our little excursion to Cakebread and Nickel & Nickel my friend and I decided to hold our breath and fit in one more winery before lunch. This particular winery I chose due to a nice writeup from Joe in Montreal. St. Clement purchases all their fruit, but has very long term contracts that have given them access to some of the finest blocks in the Valley. It helps that their tasting room is both cute and has an amazing view: View from the terrace: 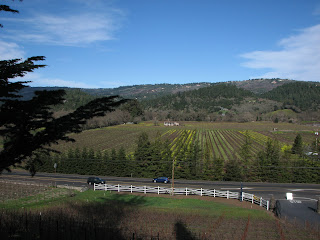 What struck me about St. Clement was its tendency to not shy away from roughness and terroir in their wines at the expense of silky texture and sweet fruit. We were lucky enough to happen upon a cellar sale, and so got to taste some older vintages and rare bottlings.

We started with an Oroppas flight, beginning with the 2000 Oroppoas Cab blend,

which had a rich and brambly palate with balanced acidity and a nice cedar character. The nose (doing this note in reverse) was cherry-like and peperry and very full and complex – in fact, entrancing. This was a very complex wine with incredible layering and depth. Poured from a magnum. Excellent. $150 ($105 on sale) for the magnum.

Up next was the 2001 Oroppas, which was less complex than th 2000, but was also more subtle with a smooth berry palate and a touch of toast. Somewhat of a mocha component here too. I found this very elegant, in fact much more so than the 2000, with a great level of finesse throughout the palate. Very Good+. $150 ($105 on sale) for the magnum.

The last of the Oroppas vertical was the 2002 Oroppas, which had a distinctly minty nose. Spicy blackberry predominated on the palate. Flavourful, but in relation to the 2000 and 2001, which each fulfilled a niche (power and layering vs. finesse and elegance) the 2002 was a bit of an ugly duck – but a tasty one at that! Very Good+. $150 ($105 on sale) for the magnum.

The universe must have been on our side that day because we were also treated to a mini-vertical of the Howell Mountain cabs, starting with the 2000 Howell Mountain Cabernet Sauvignon. Intense earthyness, cassis, and eucalyptus were forward on the nose and palate. A very structured and well made cab, but lacking the layering of the 2000 Oroppas, and not drinking quite as well as any of the Oroppas in my opinion. But Howell Mountain cabs often need time. Very Good. $180 for the magnum.

Our mini vertical finished with the 2002 Howell Mountain Cabernet Sauvignon, which was a HUGE powerhouse of a cab, with chewy and tight blackberry fruit. The tasting note suggested cola and plum spice, but right now the tannins are so massive on this beast that it is honestly hard to fully appreciate. Give this time and I’m sure it’ll be phenomenal. Very Good+. $180 for the magnum.

The Cab dominant tasting was luckily punctuated with two other varietal wines, the first being the 2006 Abbott’s Vineyard Chardonnay, which had a very dominant nose of banana and rich tropical fruit. In fact, the banana was so dominant that it overwhelmed most everything else. If you like a creamy lactic banana vibe, then you will also dig this wine. Personally I hoped for a little more complexity, which maybe would develop with time. Very Good. $?.

The last wine I tasted also happened to be the one I picked up: the 2002 Progeny Syrah, which was built like a Northern Rhone syrah with a massive palate that I would describe as intensely meaty and brambly. However, this also had a nice California fruit component that balanced the imensity of the textural elements of the syrah: cloves, spices, chocolate, and massive dark fruit. Wonderful structure and integration – this is an awesome California syrah, and atypical for what you usually get around here. Very small production. Excellent. $80 ($60 on sale).

After St. Clement we had a pretty quick, but tasty, lunch, which was followed by perhaps one of the greatest tasting experiences I have ever had. But that’s for the next post…