There are varying opinions about large grand tastings where hundreds, if not thousands, of wines are poured – no less so in a city that is pretty passionate about its wine. The San Francisco ZAP Zinfandel festival is about as large and crazy as you can get with festivals – witness the photo below – covering two massive pavillions and around 300 different zin producers, many of which were zin specialists pouring up to 12 different wines. 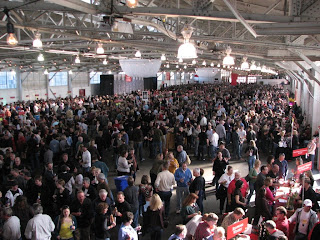 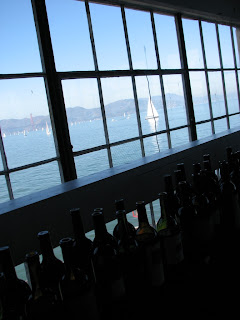 sorts of events. On the other hand, it strikes me as somewhat grinch-like to look down on events like these since they really serve as a venue for the public to indulge and learn about wine in a relaxed settting. And, as Sean over at Vinifico points out, Zinfandel seems to bring out the most casual and least pretentious of the wine crowd, which is always a good thing. I can’t help but point out that I am not usually a big Zin person, but that tasting so many of them side by side and comparing regions gave me a new appreciation for the grape and will probably result in me picking up a few more than I have done previously. The view from the press lounge also didn’t hurt.
I was fortunate enough to meet up with Sean and his friend Graham at the festival, which was not only a great time, but also provided me with a few pointers as to which producers to look out for. And I am happy they did since my favourite of the show was their recommendation: Mazzocco. 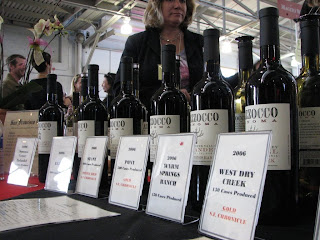 Mazzocco is a relatively new operation (I believe releasing their first vintage in 2005) that makes a bevy of small production single vineyard zins and zin reserves that are perhaps the best of the variety I have tasted. I tasted about 15 wines from them, each of which deserved an excellent to excellent+ rating from me because of their purity of fruit, buoyant acidic backbone, and fantastic variation across each vineyard. Clearly these are more than just big alcoholic bruisers, despite the fact they are most definitely super-intense fruit bombs. To make those kinds of wines work it is all about balance, acidity, and tannic structure to off-set the silky sweet fruit. Mazzoco does this perfectly. My personal picks were the Pony Reserve 2006 and the Maple Reserve 2006. I believe these wines hit around $30 for the basic bottlings and $50 for the reserves. 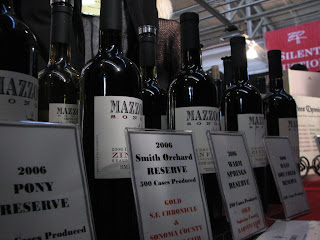 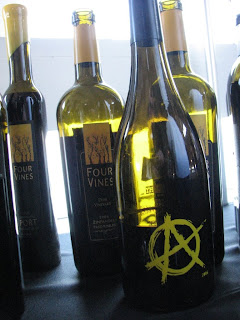 I also got a chance to taste several wines from this good value producer with wines at mostly $25. I personally seem to enjoy Paso Robles for Zin and the Four Vines Biker 2006 did a good job by providing body, depth and character to the fruit of a wine that can often seem too sweet to me. The Four Vines Dusi Vinyeard 2006 was even better with real punch and roundness and an almost brambly character that suits Zin well. Very Good+ for both.
Grey Wolf Cellars 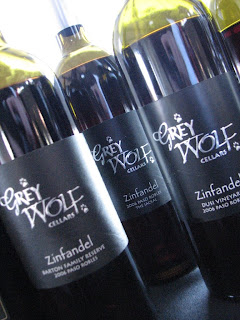 Another Paso Robles standout for me was Grey Wolf Cellars, with wines at around $35 a pop. I tried two single vineyard Paso Robles zins and a blend called the Jackal. All were very consistently balanced, with dense packed fruit, depth and length. Again having a somewhat brambly character, they nonetheless remained fairly elegant. Very Good+ to Excellent.
In the final analysis, this was a pretty sweet tasting, especially if paced well. I’ve done tastings in the past where I have rushed through as many as possible and, while great for getting to know a lot of wines, certainly isn’t the best way to enjoy a festival. I recommend a reasonable pace, a healthy dose of spitting and rinsing, and a few gulps of the most delicious wines :).
Posted in: ZAP Zinfandel Festival