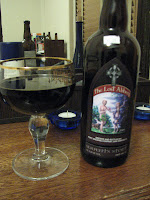 I don’t blog about beer too often, mostly due to the fact I used to consume a lot more wine than beer. Being in the US, however, has provided me with access to an incredible array of microbrews and so I’ve been tasting through quite a bit of fantastic stuff. This often happens at some great beer joints in town, which I have blogged about before. A few choice selections made it home, however, with high hopes.

Lost Abbey is a pretty fantastic California brewery that specializes in Belgian ales. Their sister brewery, Port brewing, focuses on american styles. This particular beer, however, is billed as a Belgian style stout. I love Belgians and I love stout – so I had to pick this up. This is their first release of the beer as a winter seasonal.
Sitting at a heavy 11% abv, this is rich and malty, with a sweetness more in the Belgian style than in a traditional sweet stout like Guiness. The roasted malts give this a hint of bitterness and make it fairly robust. The carbonation is taken up a notch – likely due to the Belgian influence – and this adds a good crispness and layers the flavours well. In the end this is very solid, and one of the better stouts out there, even if I was expecting something a little more interesting.
Very Good to Very Good+
$11/650ml at City Beer
Posted in: American Beer, Stouts, Very Good