The first day of spring in Northern California brought with it both luxurious temperatures in the 70’s and new buds. Luckily for me it also brought with it a return to the Napa Valley, where I hit up four wineries and sampled many more wines. The day began with a tasting at Cardinale, which, while producing wine at a serious price point, I was prompted to visit due to a favourable review by Joe. 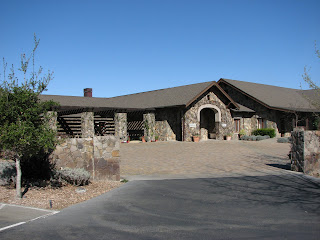 Somewhat drawn back from the main road, Cardinale is sited on top a tiny hill in Oakville, giving it beautiful views of the surrounding vineyards and hills. 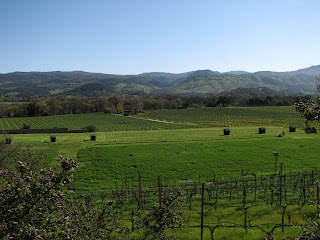 As a Jess Jackson owned winery, one might anticipate a corporate attitude here, but it was clear to me that Jackson allows the winery to run almost entirely independently on the wine-making front, focusing on making the “best product possible”. That said, I did find the wine tasting itself overpriced at $35 for merely two 3 oz. pours of wine and a little tutored tasting.

The tasting Started with the Howell Mountain side-project La Jota, a recent acquisition by Jess Jackson. The 2003 La Jota is basically a cabernet and merlot blend with a moderate case production around 2500-2900, depending on the harvest. On the nose I found black currant fruit and soft merlot-like jammy black fruits. There was also a cool minty roundness that suggested a potentially softer palate than normal for Howell Mountain. On the palate this was very briary and up front, with the intense power that only mountain fruit can provide. A woody mid-palate moved into a nicely layered and very smooth finish. Overall, I found this a bit too massive and fruit-forward up front, even though the back end was quite enjoyable. Very Good to Very Good+. $50.

After sipping some La Jota on the patio, we moved into the formal tasting room for a tutored tasting of Cardinale, which had been decanted several hours prior to my visit. One half of my plate was presented with a selection of foods meant to highlight specific flavours such as sourness, sweetness, umami, and saltiness which were used to highlight the effect each of these flavours had on the wine when consumed together. The second moved into regular pairing territory with cheese and cured meats. 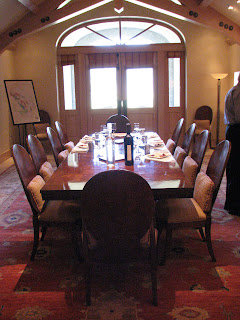 The isolated flavour component of the tasting was an interesting idea and informative, but given that we were only poured 3oz of wine it seemd a bit of a travesty experimenting with how sour 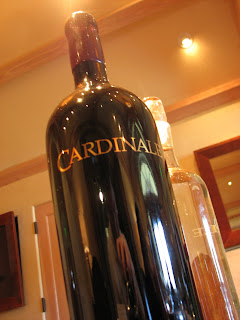 and wine clash. I’d recommend they increase their pours! Anyhow, when we got down to it, the 2005 Cardinale was a remarkable wine with a subtle and layered nose of cassis, blackberry, chocolate, and earthiness.
The palate exuded quality, with artful layering and elegance. Beautiful clean cassis and plum fruit up front, the mid palate was earthy and had a subtle punch of acidity that helped keep the palate awake and the wine building into its extremely long finish. Despite the amazing purity of fruit, there is also a savory herbal component to the wine that promises to expand with time. Made from 88% merlot and 12% Cab, the fruit is sourced from some of the best vineyards on Mt. Veeder, Howell Mountain, Spring Mountain, and Stag’s Leap district, which are perhaps the four most highly regarded regions in Napa. I certainly am a big fan of all the wines produced from those AVA’s, and the quality of blending here really shone through. A fabulous wine that will improve for over a decade and I’m sure will cellar for longer than that. Aged in 100% new French oak. Excellent to Excellent+. $200.
A great start to the Napa Redux, with plenty more in store…
Posted in: Napa