On my way between appointments on my recent Napa trip I stopped by Conn Creek, situated at the base of Sage Canyon Road (which heads into the Chiles Valley AVA), a little winery producing single vineyard cabs at moderate prices (for Napa). Obviously an under the radar winery, but they have put together a pretty solid portfolio. 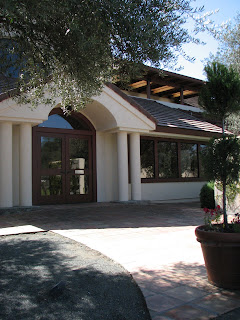 I started the tasting with the 2006 Cabernet Franc, which had a grapey nose of traditional 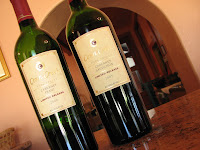 cab franc leafiness and earth. There was more dark fruit here than many cab francs however, which continued onto the palate, with its sweet red fruits, earth and, unfortunately, a bit of off-balance bitterness. Very Good. $25.
The 2005 Cabernet Sauvignon (basic blended cab), is actually made with all five Bordeaux varieties. The nose exhibited traditional mint, cassis, and cedar. The palate was quite cedar-like, and had fairly sweet fruit. Very well structured for a $25 wine. Very Good+. 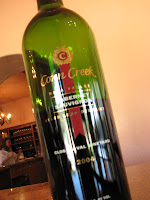 Up next were the single vineyard cabernets, which offered quite an interesting juxtaposition of various regions in Napa. The 2004 Clos du Val Cabernet Sauvignon was produced in the Stag’s Leap district, and had a very dense pepper nose with quite intense plum and cassis. This was fruit forward, but had a distinct meatyness and pepperyness not always seen in Napa cabs. The mid-palate was a bit green, and powerful tannins overwhelmed somewhat upfront, although they smoothed in the cigar-like finish. Very Good to Very Good+. $45.

I was very curious to taste the 2004 Volker Eisele Family Cabernet Sauvignon from the Chiles Valley, since I was so impressed with Brown Estate last time I visited Napa. However, this paled in comparison to Brown’s masterful cab. The nose was chocolate and plum, with a palate of blackberry, dusty fine-grained tannins, and a subtle herbaciousness. Nice grip, but lacking some elegance. Very Good+ to Excellent. $45.
The 2004 Hozhuni Vineyard Cabernet Sauvignon found its way to the bottle from Rutherford grapes. A full and open nose of Eucalyptus predominanted. The palate was elegant and very consistent, with blackberry, leather, dried fruit and fig. Very Good+. $45.
The last single vineyard cab I tried was the 2003 Truchard Vineyard Cabernet Sauvignon from Los Carneros, a fairly cool region known more for Pinot Noir and Chardonnay. The nose had spice, eucalyptus, candied blueberry and stewed dark berry compote, with a touch of dried mission fig. The palate was figgy, earthy and very dry. I would say this needs time but it already has 5 years – maybe a somewhat unbalanced wine, and yet still flavourful. Very Good+. $45. 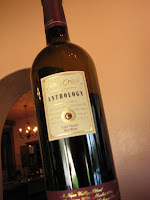 The 2005 Anthology is Conn Creek’s flagship wine – a Bordeaux style blend of 76% cabernet, 10% merlot, 8% malbec, 4% petite verdot, and 2% cab franc. The nose had lots of coffee grinds, and a very roasted aroma. A very aromatic wine. The palate had coffee again, but this time with chocolate, bitter herbs, and a lingering savoryness. The puckering tannins mellowed on the finish. In the end, a very densly structured wine and the best of the bunch. Very Good+ to Excellent. $50.
Overall I was pleasantly surprised with this relatively unknown winery. However, nothing truly excited me, even though almost all of the offerings were well made and restrained compared to most Napa fruit bombs. Worth a drop in as this place does not require appointments.
Posted in: Napa