Having opened in September 2008, Press Club is a new venture into the world of urban tasting rooms, representing eight respected Napa producers. I recently spent a few hours there checking out the scene and the style while sampling some California wine from five of the eight available wineries. 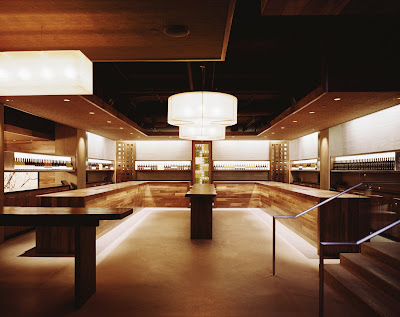 Miner was hosting a special tasting of their 2004 Oracle paired with a nice helping of sheep’s cheese, which inevitably drew me to their booth first, where I found a wine with classic cab notes of cedar, cassis and eucalyptus. The texture of the wine was quite velvety and clearly built this way in the wine making rather than growing process. However, there was a nice tannic backbone that was yet not as overwhelming as other vintages of this wine, making the 2004 ready for drinking now. A bit of residual heat on the back end of this wine dapened my impression somewhat, but that was remedied by the tasty cheese pairing. 14.2% ABV. Very Good+. $90.

I also sampled the 2005 Stagecoach Merlot, which had a minty black fruit nose and a spicy, full and expansive palate. Great tongue-wrapping structure that is yet subtlely wrought. Very Good+. $40.

Known for Chardonnay and Pinot, the best wine here was actually the 2006 Steel Plow Syrah, which was meaty and earthy on the nose and not at all easily identifiable as Californian. The palate was peppery, but chocolate and dark fruits still lingered. Tasted like an old vine Cote du Rhones Village wine. Needs a decanting to open the nose. Very Good+. $30, but this got 94 from Parker so it will go up.

The 2006 Lorenzo Chardonnay was less impressive, however, with a more typical take on Carneros chard. That’s not to say this isn’t well made with its slight mineral edge, bright tropical fruit, and a tartness made for food. However, it was somewhat innocuous. Very Good. $50.

The famed Chateau of Paris Tasting renown. But I did not taste their cab or chardonnay. Instead I opted for a couple of their more esoteric bottlings. First off was the 2007 Potter Valley Riesling, which had a rich fruity nose with a touch of minerals. Either this was oaked, or the fruit was ripened considerably. Quite a potent palate here, but also flabby. Too much melon fruit and not enough minerality. Simply cannot compare to a German riesling at the same price. Good+. $22.

The 2003 Cabernet Franc however, was another story. The nose was all cab franc with wood, earth, forest, and a little mint. The palate had very bright red fruit, was very upfront, and although closed on the mid-palate, was still a tasty and well structured drink. Quite dry, but not chalky – this is all foresty funky goodness. It would go well with rustic foods, like a good stew. The fruit was sourced from the Oak Knoll district. Very Good. $30.

An impressive winery to be sure, starting with the light bodied 2006 Stanly Vineyard Pinot Noir and its bright red fruit nose. On the palate this was a feathery easy sipper that was still dry, drawn and earthy even with predominant red fruits. Simple, but I think it’s good for the right pairing. Very Good. $45.

The 2006 Brown Ranch Pinot Noir was still closed, but had tremendous promise with a deep and thick mineral and spicy fruit nose. The palate’s depth and concentration led to a strong stone-infused core that was slightly bitter, but also well balanced. With air this added more spice and a touch of chocolate. Very Promising. Very Good+ to Excellent. $60.

The surprise of this lineup was the 2006 Rodgers Creek Sonoma Coast Syrah, which had a vegetal nose with pepper and other exotic spices. Expressive in the glass, the palate had chalky white pepper, and was acidically very bright. I think this needs to mellow somewhat, and demands a food pairing. Syrah with a pinot character? 14.5% abv. Very Good. $40.

Situated on the steep slopes of Mt. Veeder, these guys have a pretty fantastic fruit source. Luckily for us, all their wines are made with their estate fruit, which they also sell to other winemakers. The accessible wine here is the one non-estate wine: a 25000 case 2008 Sauvignon Blanc from Russian River, with a nose of round persimmon and cat’s pee. Very much an american version of a New Zealand Sauvignon Blanc, the palate was acidic, tart, clay-like and had tons of citrus like grapefruit and lemon. Very Good. $19.

The big daddy here, however, was the 1999 Bismark Noir, which is a bordeaux blend dominated by Cab Franc. Only 733 cases of this were made. The nose surprisingly offered up more cab sauv like characteristics of mint, wood and black fruits. The palate, though, was herbacious, savory, with bitter chocolate nibs. Black fruits and a dry extremely tannic structure round this out nicely. A big wine, but a very flavourful one that is both unique and well made. NB: this wine is now called “Titan”. Very Good+. $50.

I finished off the tasting session with the massive 16% abv 2004 Bismark Zinfandel, with a massive nose of big zin fruit and a touch of rubberyness that blew off (may have been the inert gas). The palate was all chocolate, rich red and purple fruits, and caramel. A massive hedonistic zin that is not overly sweet or jammy. Reminded me somewhat of the Woodenhead and Storybook mountain zins I had a couple months ago. 910 Cases. Very Good+. $51.

Thus concluded my first experience at Press Club, which I thought presented a very nice space for sampling some good wines and getting that rare comparative perspective. The atmosphere is sleek, so those who eschew the corporate vibe may not like it here, but I think the sheer selection of wines and comparative potential make this a must see & drink destination for wine afficionados – at least once! Press Club also hosts special events, including new vintage releases, so be sure to check it out when you are in town.