Paper and exam season is upon me now with the shining light being the completion of my law degree in four weeks time. For now I will have to reminisce on previous good days, my relatively recent trip to Santa Barbara County Wine Country (aka Sideways territory) being one of them.

Without being aware that I was, through coincidence, going to be visiting wineries that appeared in the grumpy man’s wine movie I set off for Santa Barbara County for some impromptu drop ins (no appointments necessary unlike Napa). What struck me about wine country in south central california was the lack of development and the extremely pastoral landscape: most wineries are at least a good 10-15 minute drive apart from each other (other than the Los Olivos strip), separated by expanses of lush green rolling hills, vines, and the occasional domesticated beast. 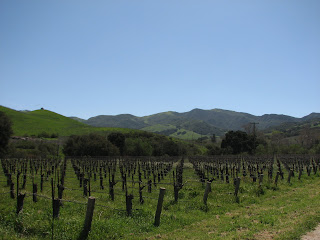 I chose to drop by Alma Rosa since I was informed that they were producing some of the most ‘Burgundian’ pinots in the County. I later found out that this is the Sanford family’s actual base of operations, the ‘Sanford’ winery being completely separately owned and operated. Some sordid tale of intrigue occupies the reason for this, but I did not pursue any further with the kind Wine Room manager. I drove in past a few vineyards and out of the sightline of the main road to come to the tasting room and winery: 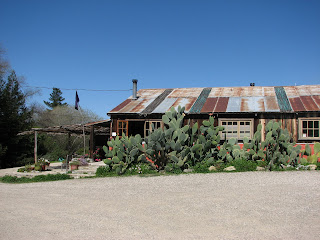 I opted for the Pinot Noir flight and set out to delve into six intriguing wines. First up was the 2006 Pinot Noir Vin Gris El Jabalie Vineyard Sta. Rita Hills, a Rose which was fermented in steel tanks and bottled without oak or malo-lactic. The nose was quite nutty and brightly fruity. A very clear palate this is on the drier side, but has a touch of sweetness, which was well integrated. A great summer wine. Very Good+. $20. 231 cases. 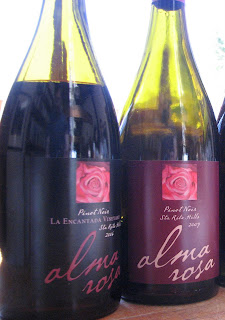 The 2007 Sta. Rita Hills Pinot Noir was the first of the two flagship bottlings from Alma Rosa, and where the full pinot love began. Earthy subtle fruit on the nose, I definitely appreciated a Burgundian element underlying the fruit – there was a bit of savory dirtyness to the nose that imparted an almost feral quality to the wine. On the palate this is much earthier than most from this region – and subtle with the fruit layering of strawberry and cherry. Very Good+ to Excellent. $38. 6301 cases.

The 2006 Pinot Noir La Encantada Vineyard Sta. Rita Hills is made in a fuller style compared to the basic santa rita bottling. The nose is richer and more intense, with spices such as cinamon and nutmeg. The palate, however, retains personality with a very savory character up front and a development of herbal elements on top of the just-ripe nose of Rhubarb and raspberry. This is on the heavier side of pinots that I enjoy, but it is securely within the very drinkable domain. Very Good+. $49. 1300 cases.

The last three Pinots I tried were essentially experimental bottlings of the components that go into the two main bottlings from Alma Rosa. It was pretty fascinating to see how each differed dramatically and contributed certain components to the finished products. These were also very drinkable on their own, but I preferred the polish and completeness of palate on the two primary bottlings. 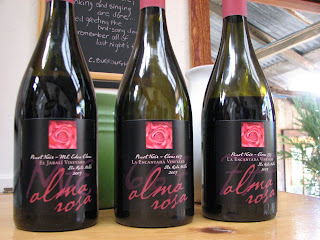 The 2007 Pinot Noir Mt. Eden Clone El Jabali Vineyard, Sta. Rita Hills is made from vines derived from Mount Eden cuttings obtained by Richard Sanford in the 1970’s. The nose on this was very vegetal with a lot of tomato leaf coming through. The palate was tannic and bright, and short on the back end. Good, but more interesting as a blending component of the Sta. Rita bottling. Very Good. $49. 236 cases.

A sniff of the 2007 Pinot Noir 667 Clone La Encantada Vineyard, Sta. Rita Hills revealed a stark mineral edge, light red berries, and a tinge of dust. The palate was still quite closed, but promised a future replete with spice, earth and dark berry fruit. Sporting a very long finish, I think this has a lot of potential, and shows how certain clones can bring a hell of a lot of structure and backbone to a blended wine. Very Good+ to Excellent. $49. 234 cases.

Last up was the 2007 Pinot Noir 777 Clone La Encantada Vineyard, Sta. Rita Hills, which had a punchy nose of baked dark fruits (plums maybe) and some spice. The palate is very fruity and deep, round and full with nice notes of strawberry, cherry and cinamon. This is authentic fruit – like freshly squeezed raspberry and blackberry juice – and certainly not over-extracted or relying on high alcohol for body. Clearly the fruit depth of the main Encantada bottling comes from this clone. Very Good+. $49. 235 cases.

My final take on Alma Rosa, which apparently did appear in Sideways – something I did not realize until after I had left and it dawned on me why they seemed so perturbed when I pulled out my camera – was that this place is trying to do something really great with Pinot in SB county, and is avoiding the overly alcoholic fruit baths that a lot of other places go for in these parts. Clearly they take their blending seriously and like to share that experience with their guests. I highly recommend their wines. And, I think it’s probably a good thing that even with the success of the movie I wasn’t made aware of its presence for one second while tasting the wines. That in my books takes a bit of integrity.