My third and penultimate stop during my one day jaunt through Sideways country was Beckmen, one of the top Rhone-style wine producers in California. Sadly, this excellent vinter was not pouring at the Rhone Rangers tasting, compounding all the more my desire to visit their winery. 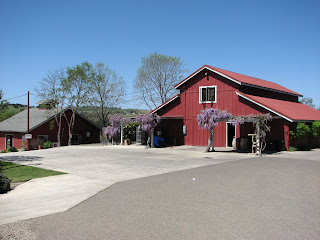 Firstly, I have to comment that I love how the wineries in central California are so much more down to earth and homey than the mega-rooms that make up Napa County. This makes tasting the wine feel more therapeutic and more focused on the simple pleasures of flavour and aroma. I do have to comment, however, that the pours were pretty stingy here, which even though I spit, is damaging to the experience, especially since not enough wine in the glass means not enough wine to produce a proper bouquet. I tasted through both Beckmen’s basic bottling series and their high end wines.

The first wine poured was the 2008 Estate Sauvignon Blanc, a clay heavy and grapefruit dominant patio wine on both the nose and palate. Simple and standad, but clean. Very Good. $16.

Delving into yet another attempt at making Marsanne work in California Beckmen produces the 2006 Purisima Mountain Vineyard Marsanne as a blend of 80% Marsanne and 20% Roussane. The nose on this was weak and very subtle. I felt it lacked expression. The palate was pretty flat, but had some orchard fruits like peach and a bit of hazelnut. I also got some burnt rubber. I’m still passing on almost all of these Rhone style whites. Good+ to Very Good. $25.
Ah Rose – it almost inevitably sucks, even though it doesn’t have to. The 2008 Purisima Mountain Vineyard Grenache Rose was very light on the nose with basic red fruits. An off-dry strawberry potion on the palate. Boring. Good+. $18. 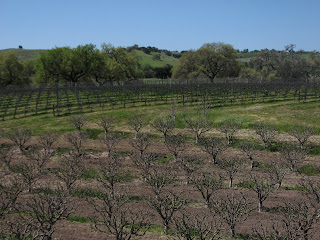 Beckmen’s Vineyards behind the Tasting Room

The 2007 Cuvee Le Bec was a grenache based red blend that had a dusty and nutty nose. Pepper, simple raspberry, a bit of savory herbs and a touch of hazlenut made the flavours on the palate decent. The overall structure, however, was lacking here. Good+ to Very Good. $20.

Interestingly Beckmen also makes a 2006 Estate Cabernet Sauvignon, which had a nice baking spice, cassis, black plum and chocolate nose. Decent fruit quality on the palate, but tempered with firm tannin and ripe acidity. I enjoyed this, but the Star Lane cab is superior. Very Good. $30.

Last up was the basic Syrah bottling from Beckmen – and Syrah is what they are known for down here. The 2007 Estate Syrah had a nose of roasted nuts, chocolate sauce, and smelled distinctly like baking a chocolate cake. A very rich palate holds up a seriously tannic structure. With mostly blackberry up front, this wine is still quite linear and needs time to develop. Nicely integrated, lengthy and layered finish. Very Good. $30.

So given those reviews I suppose I have to admit that I was disappointed with Beckmen’s basic bottlings. They tended to be a bit one dimensional and didn’t take any risks. Moving into the mid-range, however promised a bit more consistent quality, at least in the reds. 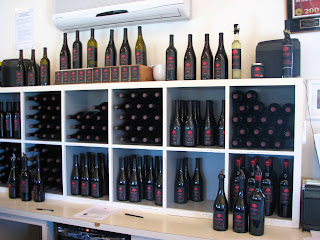 Unfortunately the 2007 Purisima Mountain Vineyard Grenache Blanc left me feeling hollow. The nose was actually quite expressive with peach and apricot. However, it also had a very bubblegum like aroma that didn’t do it for me. The palate was quite sweet, with a nice floral element. Overall, though, this is one dimensional. Good+. $30.

The 2006 Purisima Mountain Vineyard Grenache was very promising, however. A dusty spicy nose with strawberry and chocolate providing depth showed me Grenache character that isn’t too common in California. Pepper and spice overlay the flowing red fruits and various berries on the palate. This is more on the ripe side and is very tasty – but in the end it is a bit too fruity a style of Grenache for my personal taste. This is not overripe, though, and many will enjoy. Very Good to Very Good+. $48.

Another solid offering was the 2006 Purisima Mountain Vineyard Syrah with its very spicy chile and chocolate nose. I also got a bit of cassis and plum. The palate continued the cool chile/chocolate elements, and added a nice dusty finish. This is still distinctly fruit forward for a syrah, and is very smooth texturally. Very Good. $48.

The last three wines I tasted showed what Beckmen is all about. They were far and away a cut above every other wine and truly showed the phenomenal character of the Purisima Mountain site that Beckmen so fortunately owns.

The 2007 Syrah Clone #1 was actually produced from cuttings originally imported from Western Australia. The original vines from Australia were planted way back in 1863 and were brought to California by UC Davis in the 1970’s. The nose on this beauty was heavy and dense with lots of mocha and toffee. The palate tastes very Australian and distinctly like a Western Australian Shiraz – of a very high quality. The palate is quite dusty and restrained, with black fruits, chocolate, and underlying layers of earth and mineral. This is incredibly layered and elegant and a superb Syrah that shows what California can do. Excellent. $52.

I also tried the 2006 Block 6 Syrah from the Purisima Mountain Vineyards – block 6 being the best block of the vineyard. I got brown sugar and heavy plummyness on the nose. But on the palate this was all pepper and spice underlying a masive tannic beast of a wine. Again, this has beautiful layering that translates from the nose to the finish in a seamless development. I think the mid-palate needs time to mellow a bit as the tannins are quite massive right now. However, in a few years this should be really great. Very Good+ to Excellent. $55. 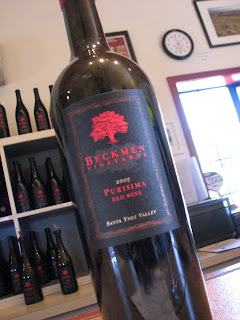 The wine of the day, however, was Beckmen’s flagship 2005 Purisima, which is made only in the best years and is meant to represent the pinnacle of what Beckmen can do with their Purisima Mountain fruit. This is 60% Grenache and 40% Syrah. The nose is BIG: rich, forward, and absolutely luscious with hoards of dark fruit, fig, plum and black cherries. There is almost a raisinated component to the nose because it is so dense. The palate was also very big with large dark plummy fruits up front, but dusty dark cocao nibs on the finish. What I loved about this wine, though, was that even though it was massive on the nose and up front, the mid-palate brought in considerable earthy undertones and the finish was both tannic and slightly bitter with the chocolate component. This gave the wine great balance and prevented it from becoming one of those syrupy thick syrahs that seem to do so well in the press. This is a very Californian wine, make no mistake, it just brings everything together perfectly. Excellent to Excellent+. $75.

And so did my visit to the illustrious Beckmen conclude. Unfortunately the tasting room staff was pretty amateurish and clumsily tried to sell me a membership at the end of my tasting. None the less, these guys are worth seeking out simply for the wine.