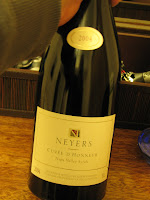 I have been consistently impressed with Neyers’ wines. As many probably know, Neyers was created by Kermit Lynch importer Bruce Neyers in 1992, and has grown to produce an incredible range of high quality wines influenced by the French wines that Neyers cut his teeth on with Kermit Lynch. With highly respected winemaker Ehren Jordan at the helm (of Turley), Neyers is making some pretty interesting and varied products that all have a great sense of personality.

At first when I opened this Cuvee, made in a Northern Rhone style – but with more fruit, and given its name in honour of Theirry Allemand, Auguste Clape and Noel Verset (who helped influence this wine), I was taken aback by its intense gameyness and heavy leaf notes. This is not what you normally see in California Syrahs or Syrah based blends. More like a backwards Cornas, in fact, at first this was somewhat unbalanced and I was disappointed. However, after a day in the fridge (which I assume was equivalent to a good decant), this opened up dramatically and really smoothed out.
The nose shifted so that mint, blackberry and currants predominated and the game and leaf took a secondary character. The palate was equivalent to the colour of the wine: rich and black. Game was dominant on the first day, but then out came chocolate, plums and blackberries. In the end I was quite happy with this wine, although I have to admit I prefer the better QPR of the lakeville road syrah. However, I feel with time this could be really outstanding. Sourced from the famed Hudson vineyards.
VeryGood+ to Excellent (after the fridge); Good+ to Very Good (upon initially opening)
$45 ($38 on sale) at Dean and Deluca in St. Helena
Posted in: $40-$60, Californian Wine, Syrah, Very Good