A Pair of Dogs

Brewdog is an extreme brewer from Scotland, specializing in barrel aged stouts. I managed to get my hands on two of their brews, and put them to the test over a few days. It’s nice to see that the craft brewing bug has spread from the US and been embraced by like minded individuals from other countries. 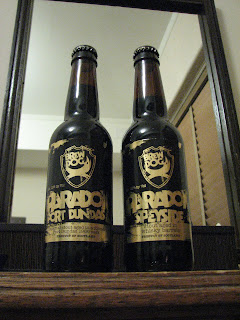 I started with the Brew Dog Paradox Speyside Imperial Stout, which was aged in whisky barrels. Sitting at 10% abv, the nose on this was very chocolatey and inviting with hints of whisky vanilla coming through. The palate was very smooth, with no noticeable alcohol and plenty of bitter chocolate, vanilla and herbs. This almost tasted like a ‘cream soda’ beer and was quite refined in taste, even with the candied elements. I appreciate that the booze was dialed back in the flavour (probably due to the barrel aging), but also how it gave thickness and body to the beer. The barrel aging is quite subtle and far less intense than some of the extreme barrel aged stouts from the US. And, as a bonus, this is a great pairing with chocolate.
Very Good+
$10 USD
The second beer was the Brew Dog Paradox Port Dundas Imperial Stout, aged in port barrels. I found this very soft on the nose and somewhat closed. There were some strange metallic notes coupled with dried dark fruits (probably from the port barrels). The palate was broader with raisin, chocolate, caramel, and plenty of cigar and tobacco. Again, this was very smooth for a 10% beer, but I found it a bit one dimensional and less interesting than the Speyside. I also didn’t get a lot of port characteristics on the palate. Maybe these would expand with age, but as of now this was a bit simple. However, as with the Speyside this paired amazingly with chocolate.
Very Good
$10 USD
Posted in: American Beer, Stouts, Very Good