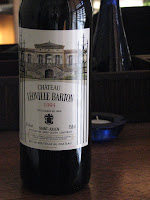 I seem to be on a lucky roll with these aged wines – it would be great to be able to afford these things for real and actually fully stock a cellar with them. Alas I suppose that will only make me value the occasional moments of joy! For those unfamiliar, this is a Bordeaux second growth that ranks among the “super seconds”, which are said to ‘approximate’ first growths in quality.

This wine exemplifies why Bordeaux is considered the greatest wine region in the world. It also exemplifies the sheer singularity of pleasure when a wine heavily impacted by vintage variation, bottle aging, and history actually reflects each of these elements in a seamless balance. There is subtlety, deftness and poise in a wine that accomplishes this, and I must say that after spending a few months drinking mostly Californian wine, it was almost a shock and awe experience to delve into this wine – so much so that I declared to myself that California really had nothing on Bordeaux in the end.

The nose is profoundly expressive and layered beyond imagination. I don’t enjoy long lists of descriptors, but here my consciousness of smell was wakened by graphite, violets, licorice, cassis, a bit of barn, layers of earth, black cherry and a bit of tomato vine. And all of that just on the nose! It is not often that one can nose a wine for minutes without taking a sip and keep experience new aromas. Astounding.

The palate mustered a bevy of skills to show its deftness, but also was as soft and eloquent as a Shakespearean sonnet: wood, tomato, pencil shavings, earth, tart blackberry and licorice were the operative motives. A great 90 second long finish completed the wine with earth, minerals and a rooty licorice lacing. Quite a fantastic wine, but in the end the nose is what took this oh so close to the upper echelon.

Excellent to Excellent+
$70 at K&L