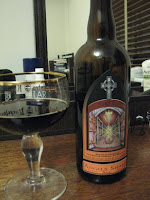 Angel’s share is somewhat of a specimen. Only available via mailing lists until this year, and now only in limited quantities at a few lucky beer stores. There is also a bit of a tumultuous story with the 2008, with reports of early bottling and unactivated yeast creating low carbonation levels. I was lucky enough to get 3 bottles of this stuff, one of which was put to the test through a preliminary assessment. The next two will be consumed at yearly intervals.

I can certainly attest that the carbonation tales are true: the yeast has either not had enough time to fully activate or there was some problem in bottling these. Nonetheless, this is still a good beer. The nose offers vanilla, chocolate, figs, raisins and a healthy dose of brandy.

The palate has loads of stewed fig, chocolate, port-like dark fruits, and a heavy brandy flavour. The alcohol is extremely noticeable at 13% abv – but as with many high gravity beers this should mellow with time. A challenging beer to consider this early, but thus far I have had better beer for a lot less money. Then again, if you drank a great Hermitage too young you might have a similar notion. Time shall tell.