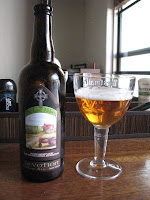 I spent the last few days in California with a good friend of mine formerly of Vancouver and now of Chicago. Fortunately, he is also a beer afficionado so it was time to open some goodies I had been saving. Lost Abbey’s Saint’s Devotion is a wild version of their standard Devotion ale, spontaneously fermented with Brettanomyces yeast. The only way to detect the difference is the brown vs. green label: clearly a sign of the ‘leetness’ of this beer. I was lucky enough to pick up this rare beer at the Lost Abbey night at Toronado during SF beer week.

A yeast-tactic nose that smells like baking bread already promised some rambunctiously funky times ahead. The palate was certainly wild with lots of funky bread, must and apple notes. The bitter finish was slightly out of balance and less smooth than some of the other wild ale offerings we sampled during the week; however, this is an eminently drinkable beer with a clean and sharp palate. Air certainly helps to mellow this beer and warmth brings out the full complexity of flavour and balances the ‘wildness’ with the rest of the beer. 6.25% ABV.