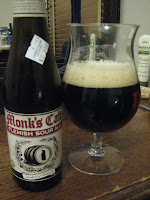 I love me a good sour ale, and the Flemish style is a great twist on the classics – one that is a good entry into sours generally with its balance of sour and slightly sweet. It’s unfortunate that crappy sugared lambics have created a bad reputation for the sour genre, adding a cooler-style veneer to a drink that many have no idea was originally sour. While not a lambic, the Flemish sour has been given a similarly bad rap with the Duchesse du Bourgogne, which is carmelly sweet.

This beer on the other hand is made in the traditional style started by Rodenbach. With not much head (1 inch that dissipates fast), this beer has a nose with lots of cherry, strawberry, and a little balsamic. The palate is light and fluffy in texture and has a great concentration of fruit in the mid-palate – lots of cherries and strawberries and a little forest underbrush. The finish is short, but the flavour is robust and the price is right. Highly recommended as an intro to the world of sour ale.