The Greatest Beer in the World?

Today was a momentous day – the day I say goodbye to 10 years of post-secondary education and hello to my new Juris Doctor degree: yes, law school is now complete. As with any such momentous occasion, celebration must be extended over many days. This, given I just finished an exam a few hours ago, is my amuse bouche. 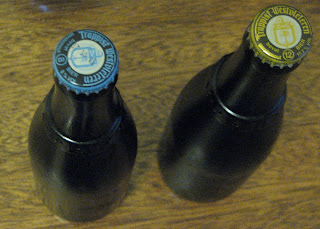 Westvleteren is considered by many to be not only the greatest Trappist brewery in the world, but also the producer of two of the world’s best beers: Westvleteren 8 and 12. For those not in the know, Trappist breweries were traditionally operated by monks who use the proceeds to support their ascetic existence. Many of the Trappist breweries are now contracted commercial operations. Westvleteren, however, remains true to its origins. As such, one can only obtain the beer at the monestary on select days. Furthermore, the monks brew a limited amount of beer with no plans to expand. They make enough money to meet their needs and that’s that. Accordingly, Westvleteren beers are extremely hard to come by and are perhaps some of the rarest in the world. Lucky for me I got my hands on two bottles of glorious monk’s brew. 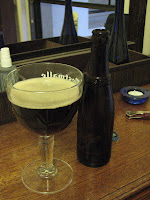 Made in a dubbel style, this is really unlike any dubbel I’ve ever tasted. With a small but persistent head, this pours a cloudy dark brown in the glass. The nose is really spicy with some subtle fruit ester notes like plum and fig. Tasting this is quite unlike any other beer really – it’s as if my Belgian dubbel jumped into bed with a wet temperate forest and produced a love child. The palate is slightly medicinal, has lots of spice and herbs, and finishes with a decent but very unique hop kick of grass and earth. I also got bread notes here, likely from the yeast. This beer is not at all sweet like many other Belgian beers, instead treading the line between subtle malt sweetness and the bitter complexity of multiple hop profiles. The finish here is disturbing in its length, which I measured at around 2-3 minutes. But, that’s what hops can do. The booze is also very nicely integrated. In the end this has a sense of balance, restraint and provides the drinker with a profoundly refreshing dryness unheard of in Belgian dubbels. Just as the monk’s would like it. 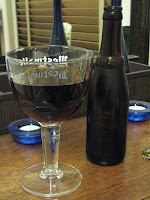 The granddaddy of all Quadrupels and considered by many to be the best beer in the world. Unfortunately for me, my bottle had some carbonation issues which ensured less aromatics due to a dissipated head. Nonetheless, this was just as unique as its less alcoholic brethren. The beer poured a malty burnt caramel brown in the glass – almost like liquified caramelized sugar. The nose had dates, raisins and caramel and promised more depth and intensity than the 8. Accordingly, this beer is distinctly sweeter than the 8 but still a lot less sweet than many Quadrupels with its very full palate of raisins, dates, figs and caramel. This also had a moderate hop finish – less hoppy than the 8 – that added forest, mushroom, leaves and dirt. I am not sure why my bottle had so little carbonation, but overall this beer has a great fullness and completeness to the flavours, which is quite uncommon. There really is so much going on in this beer you can’t grasp it all in only one bottle. Very good stuff, I only wish I got the fully carbonated experience.

In conclusion, what is so great about the Westy beers is their balance and their incredibly unique flavour profile. I’ve never tasted hops like this in a Belgian style beer and everything is put together with perfection as no element overwhelms the other. Many Quads and Dubbels rely so much on sweet malts and fruity yeasts that they lose a little complexity and completeness. That is not the case with these beers, which have every feature of the brewing process in perfect harmony: malt, hops and yeast as a choir rather than a rambling crowd. Are they the best beers in the world? I don’t know – at least not for my palate. Are they incredibly unique and worth trying? Absolutely. A great treat for this great occasion.