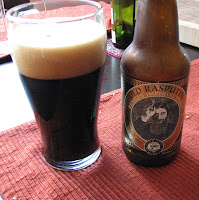 Stout – isn’t it summer? You wouldn’t know that given the last week of weather here in Vancouver. Hence, I pulled out and revisited an old favourite from California brewer North Coast (maker of other tasty beers such as Brother Thelonious).

Pouring with an awesome thick head, the nose on this was classic toasty caramel and heavy roast coffee. The palate expands on this and is very deep and intense: fresh coffee grounds, ash and cigar punctuate the viscous texture. Each flavour also manages to keep in balance with the others and the alcohol (at 9% abv) is not overly noticeable – a feature that will smooth even more with the proper aging. In the end, this is a very well made Russian Imperial Stout and a perfect standby for cold summer evenings.