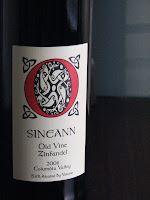 I doubt anyone associates Oregon state with the renowned all-American California variety zinfandel, but here we have one of Oregon’s most noteworthy producers making one as their “flagship wine”. As much as Sinnean is known for their Pinot Noir, they claim that it is this old vine zin, made from a 100 year old vineyard, that is their best wine. And, despite the latitude there are no signs of underripeness and no chaptalization.

The nose on this Columbia Valley zin was boozy and had blueberry, chocolate and candied cherry. The palate was extremely full and very extracted: sweet blueberry juice, cherry, strawberry jam, and chocolate undertones. This is extremely smooth and tasty, although somewhat simple.

However, the story does not end there. While I took the above tasting note while drinking from a Riedel glass, I decided to experiment and test out how that note compared to a simultaneous note taken while drinking from my new Eisch glasses. For those not in the know, Eisch has created glasses with a special coating that supposedly decants the wine instantly upon pouring it into the glass. Well, we shall see.

In the Eisch glass the nose was far more restrained and dusty, while also being far less fruity. On the palate the wine was much smoother, less boozy, and had intricate notes of herbs and underbrush. And, while noticeably less massive, it had impressive complexity and layering far superior than in the Riedel glass. So, it seems as though this limited test shows that Eisch can make a considerable difference to a wine’s aromatics and flavour profile. Is it better? Not necessarily – but it certainly is different.

The wine itself? Although perhaps a little pricey, it is quite impressive and certainly worth a try.

Very Good+
$55 at Everything Wine