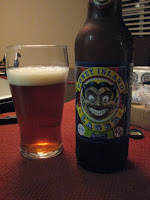 With the recent spate of fall-like weather in Vancouver, a lager may be the last thing on your mind right now. For the beer geek, the lager has become emblematic of big corporate beer and its quest to dominate the realm of flavour with bland swill. Fortunately, both the weather monger and the corporate beer hater have something to appreciate in this micro-brew from New York. Shmaltz brewing, also producers of the HeBrew series, uses the Coney Island label to exclusively release lagers. Contrary to popular belief in the beer geek world, lagers are not de facto flavourless and boring. In fact, lagers constitute quite a large category of beers unto themselves, similarly to ales, and the style should not be written off quickly. Lagers are traditionally made in spring and cold-stored over the summer months and come in various styles including Helles, Bock, Marzen and Pilsner. Further, lager can range from dark and malty, to hoppy, to light and dry, the lattermost being the dominant style in the US macro-brewing market.

This particular lager is on the darker and maltier side of the scale, with a nose of sweet malts, fruit, bread, sugar, banana bread and candy apple. Interestingly, the palate is almost Belgian-like and has an incredibly full bodied texture and really highlights the bready elements of the beer. Despite its massiveness, I also enjoyed some slight floral notes on the palate and its very clean dry finish, which also happens to make it outstanding for pairing with fuller bodied spicy foods. I suggest trying this beer with some East Indian cuisine or a spicy sausage, and I hope that any beer afficionado is willing to give this beer a try in order to revitalize the unfairly demonized world of the lager.