The Federal Importation of Intoxicating Liquors Act dates back to the Prohibition. That’s right, the prohibition. Despite the fact that we as Canadians have long progressed beyond the moral and economic myopia of the prohibition era, we are still governed by a statute created during that period. The fundamental problem with this act is really boiled down by section 3 (1), which reads:

“3. (1) Notwithstanding any other Act or law, no person shall import, send, take or transport, or cause to be imported, sent, taken or transported, into any province from or out of any place within or outside Canada any intoxicating liquor, except such as has been purchased by or on behalf of, and that is consigned to Her Majesty or the executive government of, the province into which it is being imported, sent, taken or transported, or any board, commission, officer or other governmental agency that, by the law of the province, is vested with the right of selling intoxicating liquor.”

To control liquor in the province, the Liquor Distribution Act has banned consumers from owning any liquor unless it has been obtained from an authorized source. Again, that’s right, it is illegal to own liquor in BC unless you have obtained it from a source authorized by the statute. These sources include: persons or entites authorized under the Liquor Control and Licensing Act (private stores, restaurants, and a few other exceptions), liquor held as “acquired liquor” by the manufacturer or the manufacturer’s agent (hence the proliferation of agents in BC), liquor cleared and charged by customs for personal use, liquor manufactured in BC but not packaged for sale and still within the possession of the manufacturer (what I like to call the home brewer provision), and several other little exceptions we won’t worry about here.

So, let’s unpack all this bureaucratic nonsense.

The Liquor Control and Licensing Act authorizes the general manager of the BCLDB to grant licenses and permits to purchase liquor from the branch for resale and reuse. This is why most restaurant wine lists are boring – they all have to buy from the liquor stores and they cannot import wine on their own initiative. What serious sommelier wants to work in such a stilted environment for acquisition of liquor and building an amazing wine list? Not many, and it certainly doesn’t make their job very easy. Also, the private liquor stores HAVE to buy from the BCLDB, which in turn buys from manufacturer’s agents. Of course large established agents have a vested interest in keeping the system as it is and discouraging newcomers. They make more money if the selection is limited. Thus private stores buy from the same old same old agents and have the same crappy stock. That is, except for the few who have grandfathered importation licenses held by entites other than the store (it is illegal to import and retail at the same time) such as Marquis, Liberty and Kits Wine Cellars. Of course, with tax as it is, even these stores don’t have many great bottles under $20 forcing, as John Clerides of Marquis asserted to me, the vast majority of BC wine drinkers to drink swill since the base price of most wines that end up being under $20 in the province is under $10 elsewhere. This makes it near impossible to support small producers, biodynamic producers, etc. within the mass-market, leaving them for the wealthy and the wine geeks only.

2. Manufacturer’s and Their Agents

As I mentioned above, manufacturer’s agents dominate the wine landscape in British Columbia. Many in the industry know this. However, what most people don’t know is the crazy provision of the Liquor Distribution Act that governs these agents: section 6. Section 6 provides that the BC Government “holds title to” (i.e. owns) all liquor in the province as soon as it enters the province. This includes liquor imported by agents. Yes, another moment of astonishment. The BC government owns everything brought into the province even if they didn’t pay for it. Not only that, but section 7 of the same act states that they are not liable for any loss, damage, theft, etc. of these products. So, the government regulates who can bring wine in, is declared legal owner of it, sets out where and how to distribute it, but will not take responsibility for it. Furthermore, subsection (3) states that the BC government acquires title to (owns) all liquor in the province that is bottled in commercial packaging. Thus, as soon as a brewer or winery bottles their product for resale, the government owns it. I will ignore the exemptions under the federal act for the purposes of this post.

So, how do the manufacturer’s and their agents get paid? Well, luckily the government doesn’t just steal the liquor outright. Instead, it pays the agents after it has sold the liquor at its stores or through its distribution channels. Furthermore, under sections 8 and 10 of the Liquor Distribution Act the government can require an agent or manufacturer to repurchase any liquor it wants them to. So, anyone importing liquor into BC has to be willing to assume the risk that they will be forced to repurchase the liquor from the branch. This is obviously a huge bar to any manufacturer, especially a small one, who wants to take a risk in a new market. The British Columbia market is run like a cartel that has not only monopoly power over an industry, but also the means to change the rules and enforce them with civil and criminal charges (i.e., in my opinion, brute force).

We’ve all been seriously annoyed at the 2 bottle personal exemption when bringing wine back into Canada. But few of us know the legal regime that supports this practice, for which we have to turn to section 19 of our best friend the Liquor Distribution Act. Under this section, a “casual importer” (you and me) must surrender all liquor to customs upon entering BC. Of course, remembering trusty section 6 we will remember that the BC government now owns the liquor we just brought into the province, and lest we forget, section 4 makes sure that it is illegal for us to own it unless we follow the procedures of section 19 and repurchase the liquor from the customs officer. That’s right – if you bring in liquor into BC, you forfeit title to it and have to rebuy it from the government. Given our outrageous tax rates, this means bringing liquor into BC, even for the most avid personal collector who still spends tons of money on wine in the province, is an expensive pain in the ass that to my mind violates some pretty important property and economic rights.

Speaking of rights, let us consider how these three harsh situations play out under the Canadian Constitution. First of all, s. 121 of the Constitution Act states: “All Articles of the Growth, Produce, or Manufacture of any one of the Provinces shall, from and after the Union, be admitted free into each of the other Provinces.” In other words, Canada is a free trade zone within itself. If a product is manufactured within a Canadian province no other province can charge duties against that product. This is all well and good in theory, but as the United States has taught us with their full faith and credit clause, it can take a lot of money and a lot of lawsuits to eliminate shipping bans between states for alcohol. Even after a string of constitutional cases that declared it illegal to discriminate against importing another state’s wine, there are still many US states that ban the practice. So, what hope does Canada have? Well if one of the provincial governments charges a winery or individual for shipping wine across provincial borders and tries to fine or imprison them, a legally ambitious winery or individual might challenge the law on constitutional grounds and succeed. If that happened maybe the Federal government would reform its prohibition era statute and let Canada be the free-trade zone it should be.

But what about bringing in liquor internationally? That’s a more difficult situation and the federal government does ultimately have jurisdiction over international trade that courts will likely defer to more readily. However, what if someone were charged criminally for bringing in 3 bottles of wine for personal use without declaring them or paying tax? Section 7 of the Charter of Rights of Freedoms states: “Everyone has the right to life, liberty and security of the person and the right not to be deprived thereof except in accordance with the principles of fundamental justice.” This is obviously a very complex provision, but is it reasonable for an individual to be criminally charged because they wanted to enjoy a bottle of wine without paying extraordinary taxes on it? Is this an offense really worth a major fine or even imprisonment (for which the importation of intoxicating liquor act provides)? I can’t answer this question, but to my mind, and perhaps I’ve been influenced by my stint studying Constitutional Law in the United States, to deprive someone of their liberty because they didn’t pay tax on a few bottles of wine they are going to drink themselves is certainly not in accord with the principles of fundamental justice and is not, as section 1 of the Charter states, “demonstrably justified in a free and democratic society”. While provincial governments continue to benefit from their extortionate tax rates on alcohol, particularly in BC, consumers, afficionados and wine geeks continue to pay a disproportinate amount of tax that goes straight into the general revenues of the province. Hence, you wine geeks out there are disproportionally funding the construction of roads, sewers, and even olympic structures. Does this make any sense in a society that is supposedly liberal and free? It certainly doesn’t to me. 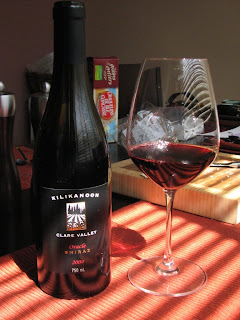 I cannot finish this post without quickly writing down my thoughts on the glass of wine that I consumed while writing this diatribe, a 2004 Kilikanoon Oracle Shiraz from the Clare Valley in Australia. This was a pretty inspiring wine and kept me writing with its amazing nose of spice, blueberry, sweet rich dark black fruits, vanilla, chocolate, nutmeg, and eggnog. Incredibly layered and expressive there is definitely french oak use here, but in a very refined way. The palate is simply stunning with amazing fruit concentration and flavours like blackberry, blueberry, raspberry, red delicious apple, dry baking spices, walnuts, chocolate, plums and plum skins. The finish is extremely long and complex while the wine has a surprisingly elegant texture for shiraz and superb balance. The fruit is very expressive, but not too pushy and the oak is a delicate (rather than brutish) backbone for the wine. One of the most complex shiraz’s I’ve tasted. I only wish this wine could predict brighter futures for the BC wine consumer.

Excellent to Excellent+
$80 at BCLDB

Disclaimer: Any errors or omissions are my own. This article does not constitute legal advice.

Posted in: BC Wine, Wine Law in British Columbia